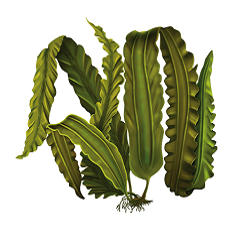 Calcium alginate improves the functional state of the digestive tract, reduces the aggressive action of gastric acid, it is recommended to deal with heartburn, healing ulcers and erosions of the stomach and duodenum in treatment of diseases of the gastrointestinal tract.

Restores bowel activity, has a laxative effect and is recommended to deal with constipation, bloating, irritable bowel syndrome.

Highly active enterosorbent recommended for elimination from the body by-products of metabolism, radionuclides, heavy metals, coming from contaminated food, water, air, especially for people living in areas with high concentration of radionuclides and heavy metals in the environment.

Restores microbiocenosis of intestine, contribute to the growth of normal microflora, suppresses the activity of pathogenic microorganisms, it is recommended to deal with intestinal dysbiosis, for the normalization of microflora after an intestinal infection while taking medications (especially antibiotics), in treatment of infectious diseases.

Protects the colon from the action of carcinogens, it is recommended to reduce the risk of colon cancer.

Restores the immune system, has anti-allergic effect, it is recommended in disorders of immunity and against allergic diseases.

Prevents the accumulation of excess weight gain, weakens increased appetite, normalizes fat and carbohydrate metabolism, it is recommended for the correction of excessive body weight, normalize metabolism in diabetes and cardiovascular diseases.

It normalizes the calcium metabolism, it is recommended to reduce the risk of osteoporosis, and increased the body’s need for calcium and calcium metabolism disorders, in treatment of diseases of the joints and spine.

Kelp helps in diseases of the thyroid gland, it is obliged by iodine, which is contained in it in the form of organic compounds.

An antagonist of cholesterol – another useful human substance contained in the kelp. It dissolves deposited in the vessel wall cholesterol deposits called plaque.

Alginates have a prokinetic effect – restore and stimulate peristalsis of the stomach, intestines and bile ducts. They also have an osmotic laxative action: enveloping effect of alginic acid and its salts, promotes water absorption detained in the intestine, which leads to the normalization of stool.

Alginates induce satiety and reduce the absorption of substances in the intestine, reduce the body’s response to a glucose load. They inhibit the activity of proteases (enzymes that break down the proteins) in the gastro-intestinal tract, reduce the glycemic index food (products ability to increase the risk of diabetes), which is important for people with excess calories, fat, animal proteins and simple carbohydrates. By enterosorbent properties of alginates normalize fat and carbohydrate metabolism.

Seafood, including kelp, plays a crucial role in human nutrition. It is much more difficult to achieve a healthy balanced diet without seafood. It is proved that the population of countries and regions near sea, where is a lot of seafood, has a higher life expectancy and less likely to suffer from “diseases of civilization”, including obesity.

Nature gives a unique source of vitality – the sea! We do our best to learn from this source of value, what your body needs!